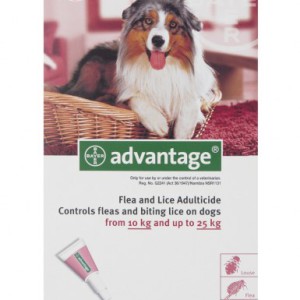 Topical prevention and treatment of mixed parasitic infections on large dogs between 10 – 25kg
Kills fleas on dogs and prevents infestations for at least 4 weeks.
Kills fleas before they can lay eggs.
Kills flea larvae in the dog\’s surroundings.
Assist in the control of flea allergy dermititis in dogs.
Treatment of ear mite infestation, sarcoptic mange, demodectic mange.
Prevention of heartworm disease.
Treatment of infextions with gastrointestinal nematodes including ascarids, hookworms and whipworms.
Advocate for dogs should not be used on cats.